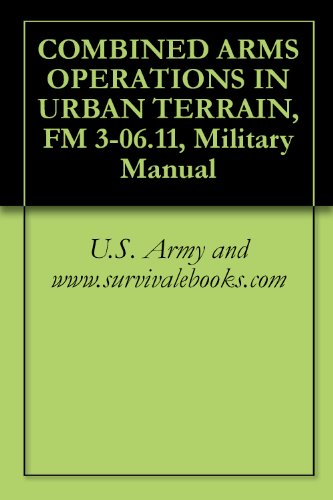 This manual is 644 pages long.

Worldwide urban growth and the shift of populations from rural to urban areas have affected Army operations. Urban areas will most probably constitute future battlefields. All major Army operations most likely include urban operations (UO) in the foreseeable future.

There is a high probability that the US Army may be engaged by threat forces that are intermingled with the civilian population. Units using the tactics, techniques, andprocedures (TTP) outlined in this manual are bound by the specific rules of engagement (ROE) issued by their headquarters and the laws of land warfare.

Urban operations (UO) are not new to the US Army. Throughout its history the Army has fought an enemy on urban terrain. What is new is that urban areas and urban populations have grown significantly during the late twentieth century and have begun to exert a much greater influence on military operations. The worldwide shift from a rural to an
urban society and the requirement to transition from combat to stability and support operations and vice-versa have affected the US Army’s doctrine. The brigade will be the primary headquarters around which units will be task-organized to perform UO. Companies, platoons, and squads will seldom conduct UO independently, but will most probably conduct assigned missions as part of a battalion task force urban operation. This section provides the necessary background information that facilitates an understanding of how higher level commanders plan and conduct UO.

A9 Cotton Nightwear Top and Shorts Loungewear Set for Women